The video, and the explanation from the Opera Company of Philadelphia are sufficient to describe this post. I will add, however, that it would have been fun to join in had I been one of the Christmas shoppers taken by surprise. 🙂 (I’m sure many did!)

From the creator of this video, and this event:

On Saturday, October 30, 2010, the Opera Company of Philadelphia brought together over 650 choristers from 28 participating organizations to perform one of the Knight Foundation’s “Random Acts of Culture” at Macy’s in Center City Philadelphia. Accompanied by the Wanamaker Organ – the world’s largest pipe organ – the OCP Chorus and throngs of singers from the community infiltrated the store as shoppers, and burst into a pop-up rendition of the Hallelujah Chorus from Handel’s “Messiah” at 12 noon, to the delight of surprised shoppers.

This event is one of 1,000 “Random Acts of Culture” to be funded by the John S. and James L. Knight Foundation over the next three years. The initiative transports the classical arts out of the concert halls and opera houses and into our communities to enrich our everyday lives.

To learn more about this program and view more events, visit www.randomactsofculture.org.

The Opera Company thanks Macy’s and the Friends of the Wanamaker Organ (www.wanamakerorgan.com) for their partnership, as well as Organ Music Director Peter Conte and Fred Haas, accompanists; OCP Chorus Master Elizabeth Braden, conductor; and Sound Engineer James R. Stemke.

For a complete list of participating choirs and more information, visit www.operaphila.org/RAC.

This event was planned to coincide with the first day of National Opera Week. 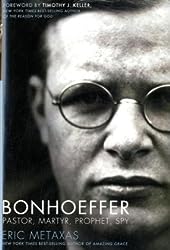 I heard of a book the other day simply called, “Bonhoeffer”. It was highly recommended, and my interest was piqued when I heard who wrote the book: Eric Metaxas. “Eric Mah-who-huh?” you say? Indeed. However, you may recall that I highly recommended his previous book, “Amazing Grace” (the story of William Wilberforce) and wrote a couple long posts (here, and here) after following Metaxas through Wilberforce’s life. An inspiring man, with an equally inspiring story, masterfully told by Metaxas.

So you can imagine that I am eager to get a copy of this book and learn of the life of another inspiring man. I really think that walking through life alongside great people as they face choices and make decisions helps motivate, challenge, and inspire us to do the same in our lives. So I look foward to getting to know Dietrich Bonhoeffer, through the eyes and prose of Eric Metaxas.

Amazon has a preview video available. Just a two minute overview of who this man was, and why his story was an interesting one. Watch below. (Then go get the book!)

NASA scientists (among others, I’d imagine) continue searching for planets and planetary systems in our galaxy and nearby galaxies with all the tools currently available to us, and they continue to discover those greatly sought after objects. And now apparently have found the first planet that is thought to be in the so-called “Goldilocks Zone”.

The Goldilocks Zone is the orbit where—like our planet, Earth—it’s not too hot, and not too cold. Gliese 581-g is apparently such a planet. (Hopefully you’ve watched the video above already, and know all the facts…)

Our two boys and I (and a little bit with the younger kids, too) have been learning more and more about our solar system, and galaxy, and the universe in general lately. The enormity of even just our own Milky Way is mind blowing. But then to think of how much larger still is the universe, it’s just unfathomable.

The boys and I have pondered the idea of other planets out there near or far where God has placed life. It’s possible! But who knows? So far we have found nothing. Pretty “lucky” how we were placed right in the “Goldilocks Zone”…

But the search continues. And meanwhile, we still have a ton to learn about our own solar system, life or no life. (There certainly is nothing like us in our own solar system… unless they have trans-dimensional cloaking devices?) We have sent many probes out to collect data and photos and explore for us … including New Horizons that is scheduled to get us our first real, up close view of Pluto (formerly the 9th planet…) in the year 2015. I can’t wait! 🙂

So, perhaps some day—if Jesus tarries, as they say—perhaps we, mankind, will be able to achieve some sort of transport that will take us to places like Gliese 581-g. Or beyond. And who knows what we’ll find there? And elsewhere? I have no doubt that, even if we don’t find anything anywhere, the curiosity the God placed inside is will keep us searching for more, and help us find more.

Hopefully when we do, we can come up with a slightly better name… 😉 We are fans of God’s creations here. There is no end to the amazing complexity and brilliant design all around you. The boys and I have been reading many books about our solar system (and the universe beyond) and the kids and Jen just joined a science club where they were learning about the incredible world of the cell. It really is marvelously fantastic. (There aren’t enough superlatives.)

Recently we borrowed a DVD from some friends of ours, then we subsequently lent that DVD to other friends, and upon retrieval of the much-lent movie, we all watched it again this week—and it was just as good as the first time!

That DVD is God of Wonders from Eternal Productions, made by our friends at LaBarge Media. It’s got some incredible video footage and it’s an hour and half of learning about God’s amazing creation. We highly recommend.

You can click the DVD cover above and purchase directly from LaBarge Media’s store (ChristianVideoWarehouse.com), but at the moment they are transitioning that site, so you might be better off purchasing from Amazon. (See link above.)

Or, you could just borrow from a friend 😉

Either way, we recommend.

The Restoring Honor rally will be streamed live via UStream, and you can watch it here! There’s no better way to know something than to see it for yourself! In case you have not heard by now, Glenn Beck has planned an event of monstrous proportions to be held this weekend on “the mall” in Washington, DC. The main event is Saturday, and is called “Restoring Honor“. The secondary event is tonight at The Kennedy Center for the Arts (I think that’s what it’s called) and is called “Divine Destiny“.

The thrust of both events is restoring honor to our lives as individuals and subsequently as a country primarily through a deep and foundational (and transformational) faith in God. (The Saturday event will also feature honoring our military, specifically a group called Special Operations Warrior Foundation that helps the families of soldiers who were killed in battle.)

You’ll hear various versions of what goes on there, but if you want to actually know what Glenn Beck is calling Americans to—and you’re not in or planning to be in DC tonight or tomorrow—you can for just $10, by purchasing an Insider Extreme membership.

Beck’s Insider Extreme, which allows subscribers to access 60 days of his radio show content (audio or video) as well as dozens of documentaries (most are pretty short) that his staff have produced, as well as access to his monthly magazine, live events, “Beck University” (hour-long lessons on “faith”, “hope”, and “charity” from three different professors), and a lot more, actually.

Insider Extreme is $10/mo or something like $75/year. It’s a ridiculously good value for all that you get.

This post sounds more like a commercial than I intended it to, but I really would love for you to hear what he says tonight—especially if you think Glenn Beck is just a “right wing” spokesperson who is also only a greedy capitalist who will whore himself out for whatever will get him the most money. (Oh, or if you think he’s just trying to convert the whole country to Mormonism…)

On the contrary, I think Glenn Beck is just a guy who started reading … and discovered that his country is not what it used to be … but that it could be once more. Not through government reforms (from the top down) but through changed (restored) lives of its citizens.

The Restoring Honor event this weekend is free, so if you can get to that, you can hear what he’s trying to get America to hear … and he won’t make a penny!

Just wanted to make sure all GregsHead.net readers are aware of the event, and if you get a chance … either get out to it, or subscribe to Insider Extreme (even if just for one month) and check out what Mr. Beck is saying. I’m not sure how we can restore honor in this country, but we’re hoping it starts right in our home, and then our kids’ homes … and so on.

I hope that’s happening in your home as well.

Saw this video shared by a few friends on Facebook today and decided to watch. I just can’t believe how much I agree with Ronald Reagan. There must be some things I do not agree with, but in almost everything I read, hear, or see he just presents perfectly the distinction between individual freedom and responsibility, and government(authority)-based control by a few over the masses. The latter is not the American way, though it has been slowly becoming our way for many generations now.

Maybe someday we (America) will be strong and well enough to realize and reassert our freedoms that are still protected by our Constitution. Currently apathy and ignorance enshroud the full understanding of freedom for many of us. Maybe we should all be taught not only about the founders of our country, but our 40th president as well.

The NFL Football season “officially” begins tonight (8/8 @ 8 ET) with the Hall of Fame game in Canton, OH. The Cincinnati Bengals play the Dallas Cowboys, and even though it’s pre-season football, we can’t wait to watch it here in the Campbell household! It will be fun to see a former Bill (T.O.) in his new uniform, and well, just fun to see NFL football again!

Hulu.com is getting into the celebration mode as well, with a series of short videos highlighting the players being inducted into the hall of fame this weekend, including Jerry Rice. (First video below…)

So… tune into NBC at 8pm ET tonight for some football, and warm up with the videos below. Enjoy!

I’ve mentioned this show here before, but we just watched the first episode of season two and loved it again. 🙂 It’s a light-hearted, fun show… Shaq takes on leaders in various sports. Last season it was Ben Roethlisberger in football, Albert Pujols in baseball, Michael Phelps in swimming, among others. This season starts with a race against Dale Earnhardt, Jr. (Imagine the size of the car to accommodate Shaq? Not to mention his racing suit!)

He also takes on the Spelling Bee champ. Ha! And future season two episodes include competition against another boxer, attempting to best Penn and Teller at their own magic tricks, trying to beat a world-class sprinter in the 200m dash, and cooking a better burger than Rachel Ray. It’s a fun half-hour. Enjoy.

TomTom released their second “behind the scenes” video for their Star Wars voices, this one featuring Master Yoda. These are really fun and well done. Enjoy!